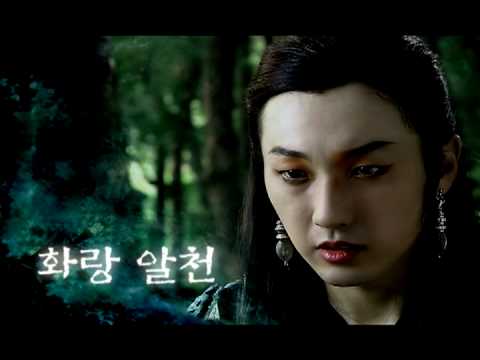 There were three survivable zones on terraformed Mars.  Each one was occupied by a thriving nation state. The one Alcheon helped found was named Silla by its people, to honor the man who put so much of himself into creating their home. Retired, Alcheon spent his days and nights practicing his sword skills, teaching self-defense classes, painting, and tending to his orchids. He was living a quiet life, looking forward to seeing how Silla would grow over the next few hundred years.
Every 21 (or 20) Martian days, Alcheon became hungry and had to feed. The Kisaeng House had moved to Mars upon the foundation of the original settlement that eventually became Silla, mostly because Alcheon was its benefactor. Every 20 or 21 of those Martian days, a feeder showed up at his residence to entertain and serve him. Tonight was such a night.
His AI, which he liked to call Cheonmyeong, alerted him of her arrival.
“There is a visitor at your front door,” it said in a pleasant voice.
“Thank you, Cheonmyeong,” he acknowledged. “Please, unlock and open the door.”
Feeders loved serving Alcheon because he always surprised them with a new romantic setting with each visit. Tonight, the benefactor lit his house with just enough candles to keep it romantically dim.  Dressed in loose, silk, white nightwear, he sat on the floor at the far side of the room, cross legged.
She slowly entered the room, in awe of the setting. She felt honored to be thought of so amorously. She wore a white hanbok and carried a white veil. She was dressed to perform a Salp’uri, not because spirits needed to be washed away, but because Alcheon loved to watch the old dances of his place and time. Cheonmyeong took note of her attire and began playing the appropriate, ancient music.
She began the Salp’uri very slowly, and appropriately intensified her movements up to the middle of the dance.  Then, just as deliberately, spent the last part of the dance slowing to a haunting stop. Because Mar’s gravity was only 40 percent of Earth’s, the veil flowed ghost-like appearance. It took nearly 20 minutes to complete the performance.
Alcheon was very moved by the beauty of her dance and asked her to come to him. She obediently knelt on both knees, very close to him, keeping her head and gaze slightly lowered. He leaned in to smell her scent, which was of a sweet musk that seemed familiar. He ran his hand through her curly red hair.  It was long and soft. The matron at the Kisaeng House knew of his fondness for Western women and usually sent him one.  This particular woman seemed extra special, though he really didn’t know why.
“What is your name?” he asked in a whisper, continuing to enjoy the feel of her hair.
“Nauri,” she began, referring to him in the ancient manner of the Joseon period. “My name is Regina Louise.”
Alcheon smiled.  Her name meant Queen Warrior, in stark contrast to the graceful performance of a few minutes ago.  He gently lifted her face to view what he already knew was beautiful.  Her skin was exotically white and her eyes were emerald green.
He was taken in by her eyes.  There was something there that he felt drawn to.  He felt a longing, a very old longing.
Keeping that feeling in his heart, Alcheon drew Regina to him into a loose back hug.  He brushed her hair from her neck and gently kissed it.  He allowed his fangs to extend and gently raked them across her neck, scraping her skin, ever so lightly.  Her body reacted with desire and she exposed her neck as much as was possible.  He continued to tease her with his fangs as he untied the top of her hanbok.  He loosened her upper bindings and felt the warmth underneath.
“How far will you allow me to go?” he asked in the dark, haunting voice that always took over when he transformed into his vampire self.  Her answer was expected and welcomed.
“Nauri, please take me to your heart’s desire.  I want to feel all of you and bring you pleasure.”
For hours, Alcheon gently took in all that was her.  As he brought her to the peak of her desire, he finally performed his one violent act, biting her neck deeply and aggressively.  Regina held him tightly as she moaned from the pleasure and the pain.  She let him drink from her until just before the point of no return.
In a quiet voice, Regina let him know he needed to end his feed..
“Nauri,” she said, almost regretfully. “It’s time.”
Alcheon released her from his bite and closed his eyes in concentration.  A few seconds later, his vampire self was hidden.  He looked at the wound he had left and felt remorse, like he always did after a feeding.  He looked at her face to see it slightly more pale and her beautiful eyes unfocused.  She had let him go just a little too far.

He took her to his bed after wrapping her in one of his robes.  She needed to sleep.
Back in the living room, Cheonmyeong suggested Regina should be given tomato and spinach soup, fortified with iron, when she woke up. Alcheon agreed and let Cheonmyeong do its work. Being prepared, Cheonmyeong already had the ingredients for the soup ready.
He cleaned up the already spent candles and picked up the clothes that were on the floor.  He smelled her hanbok, taking in her sweet musky scent.  There was something so familiar about it.

While Regina slept, Alcheon treated her wound.  The bandage, a skin healing accelerator, sank into the wound and blended into her skin.  Within a few hours, her wound would be completely healed.
Then, he sat and watched her. He always took care of his feeders before letting them go back to the Kisaeng House, but this one was different. He didn’t want to let her go. Something about her drew him to her.
Regina didn’t sleep well. She suffered through numerous nightmares. As he brushed his hand through her hair to calm her, he wondered how such a talented, graceful, and artful woman could be so full of worry and fright to cause the nightmares.
It was night, again, when Regina finally woke up.  Cheonmyeong accurately predicted when Regina would be awake and had the soup prepared. Alcheon fed her in bed and watched to make sure she ate all of the soup. Cheonmyeong had also prepared an iron rich smoothie, which Regina obediently drank.

“What will I do for you tonight, Nauri?” she asked.
Alcheon smiled. It was a fair question. Kisaengs were usually held over for a reason.
“Tonight, you will rest for me,” he said, surprising his Kisaeng.  While he couldn’t feed from her, he had the right to demand anything from her.  Anything.
“But, Nauri,” she began to protest. “It’s not just that the Kisaeng Rule of Conduct demand that I serve you, I want to please you in every way possible.”
Alcheon gently placed a finger over her lips and shushed her.
“Remember, I wrote those Rules of Conduct, hundreds of years ago, and this is what I want you to do for me tonight. I want you to sit with me in my living room. We will listen to some music for a while. If you must perform, I will let you sing. Cheonmyeong will make you another smoothie, which you will drink. By then, the news from Earth will have arrived, so we will watch it. Then, I will take you to bed, where you will sleep. I will be in bed with you, because I want to hold you.”  He paused, and smiled at her surprised face.  “This is what you will do for me, tonight.”
Having no argument, she bowed her head in obedience. She did have a question, though.
“Your AI, you call it Cheonmyeong?”
Alcheon smiled.
“Yes. She was a princess I adored and lost a very long time ago.”
Regina muttered softly the name Cheonmyeong, wondering why it was familiar.

The promised smoothie was already on the coffee table when Alcheon walked his Kisaeng to the sofa. He leaned back against the arm of the sofa and told her to rest against him. He felt very comfortable hugging her. The back hug was his favorite, and she felt like she belonged there. As he was getting comfortable, Alcheon was toying with idea of making Regina his exclusive Kisaeng.  It was something he had never considered before, with other Kisaengs.
She insisted on singing, even though her position was not good for proper singing.  He didn’t let her up, but she still sang several arias, Voi che sapete from the Marriage of Figaro, Un bel di vedremo from Madame Butterfly, and Dalla sua pace from Don Giovanni, to name a few.  He was amazed at Regina’s vocal range, and as he listened, he had more thoughts of keeping her to himself.

When Cheonmyeong announced that Earth News was downloaded, it activated the holographic emitter, producing a near perfect representation of the news reader and the stories he introduced.  Earth had become a force of natural disaster after natural disaster.  Alcheon and Regina were both glad they had fled to Mars, but felt very bad and were concerned for their Earth brothers and sisters. The UN finally took control of all national governments and instituted singular authority. This, of course, caused some of the populace to create a state of anarchy. As battle scene after battle scene was displayed in gory detail, Regina began to have problems breathing.  Without even a command from Alcheon, Cheonmyeong stopped the news playback.  Alcheon held Regina tightly until she calmed down.
“Are you okay?” he asked. “What’s happening?”
She didn’t answer, and somehow, he understood.
After a few minutes, he asked her what her favorite sounds were.  She had to think, before answering.
“I like the music created when the wind passes through the new hibiscus bushes.  I like a kitten’s purr.  I like the sound of the seashore.  There is no sound like that here. On Earth, I used to sit on a beach all night, just listening to the waves.  It’s the one thing I miss from Earth.”
Cheonmyeong picked up on Regina’s unintentional cues and played a recording of the beach sans the bird noises.  It replaced the bird noises with a soft purr of a kitten.
It wasn’t long before Regina was asleep in his arms.  Breathing her in, holding her tightly, he realized this was the most comfortable he had ever been.

After hours of listening to Cheonmyeong’s seashore and holding his Kisaeng in a soft embrace, she started to shake, ever so slightly. She was starting to experience another nightmare. Trying to comfort Regina without waking her, Alcheon kissed her neck. That seemed to work for a few minutes until she began to move a little more violently and verbalize her fear. In bits and pieces, Regina spoke in a language he didn’t understand, mentioning someone named Kitan. In Korean, she fearfully muttered the name Chilsuk and said something that might have been Mishil. He thought he heard Juk-bang and Go-do. He definitely heard Yushin as a tear escaped and rolled down her cheek.
It startled Alcheon when he finally realized why this woman was so comfortable and why he wanted to keep her near him.  He whispered in her ear the one word that would calm her, as long as it was uttered by him.
“Peyha.”